My main ride through Japan I did on my very own dear brompton and although I brought it back with me initially to Europe, after a few months I brought it again back to Japan, where it now parks below my Tokyo office desk. But sometimes I need to rely on rental bicycles. Essentially there seem to be 3 kind of rental outlets around:

Docomo rents out electric bicycles in an ever growing number of cities across Japan. Those bicycles come in two sizes. One is really miniature bicycle and the other one is still really small. (I know as a brompton rider I shouldn't call an other bicycle miniature... but these are really, really small).
All of them are electric and while you can ride them in the day time without electrical power at night that is not possible, as the light is linked to the electrical push. Although they are so small, the bikes are really heavy, so the electrical push can be very welcome. The battery apparently gets recharged every night by docomo employees, so in the afternoon / evening it can be harder to find bicycles with a high percentage of remaining energy. Although I never had a problem with it. And even if you get a low battery one, you can change it at a next station.
They also all come with a small basket in the front, which I find very convenient.
Registration for the service is through internet and I remember that it was not very difficult. Payment is through credit card. At least in Tokyo you can also purchase a day pass at some special locations and ride for a fixed price from 0:00 to 23:59.
Currently the most widespread service is available in Tokyo with stations in most central parts of Tokyo. There are however still some central wards not participating in the scheme creating some "black holes". Also quite typical, none of the bike ports are really conveniently close to a subway / train station. Essentially because most of them are either on the premisses of a conbini or on public soil. In Osaka the service is clearly still growing. In some central places there are many ports, and then there are a few very scattered far away ports.
While one can stop and close the bicycle while out on a ride, one can only return them at a port. You don't need to actually park them in the rack, but very very close to it. Even half a meter distance will not allow you to station it correctly and stop your rent. 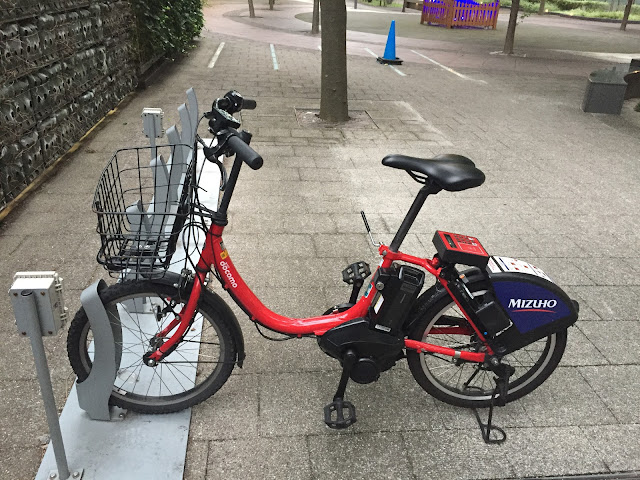 Other similar rental companies (OFO...) seem to be starting business in Japan as well, but I have yet to travel to a city where they are available.

There are essentially two possible places where to rent a mamachari. Either at a train station or at a local cycle shop. In some touristy destinations, such as Nara or Karuizawa, it is really easy to find such a rental shop. Just look for "town name" & 自転車レンタル (rental bicycle) and you should find on google maps a number of possibilities.
Mamachari sometimes come without any gears, sometimes with about 3 gears. They also very often come with a basket in front and while they are bigger than the docomo cycles, they are still quite small. They also come with a small lock (often installed on the rear wheel) so you can park somewhere underway. Often, but this will depend on the shop, you are not allowed to rent it overnight.

Advantages
Disadvantages
I personally rented on at a the JR train station in Nara, in Arashiyama, and outside the station in Karuizawa (where they also had tandems, which is a rare sight in Japan as they are outlawed in many prefectures), but apparently not in Nagano.

I have never used such a service, but I know at least that at the start and end point of the Shimanami Kaido, you can rent Giant race bicycles. And also in Tokyo I have heard of a few places where you can rent a "proper" bicycle.

Surfing through the net, I also found this company in Osaka: https://globalwheels-japan.com/ where they rent racing bikes, but also touring bikes. Plus they organize trips and even if you don't book a trip with them, they have the strava data of their rides online.