Due to typhoon 21 which passed through Japan on Tuesday this week and hit specially bad the international airport of Osaka, I had an other weekend in Japan before flying back next week Thursday from Narita.

The weather today was not really good, but also not bad enough from stopping me to ride a bit on a bike through Arashiyama. I rented a mamachari (this time without any gears) right in front of the Hankyu Arashiyama station and set off in what according to the shop owner was the wrong direction, i.e. not to "downtown" Arashiyama where all the tourists are, but to Matsuo Taisha, along a small neighbourhood street. 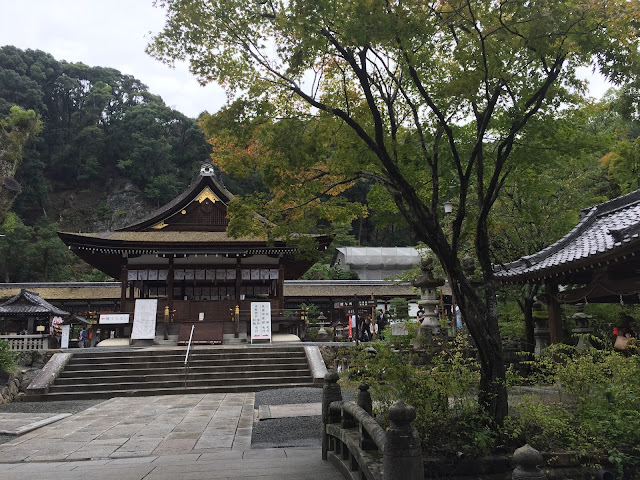 The shrine was moderately busy with families bringing their babies to the first shrine visit. Behind the shrine there is a a Japanese garden built I think in the 1970. Not really nice, too much love for concrete. The small waterfall behind the torii was nicer: 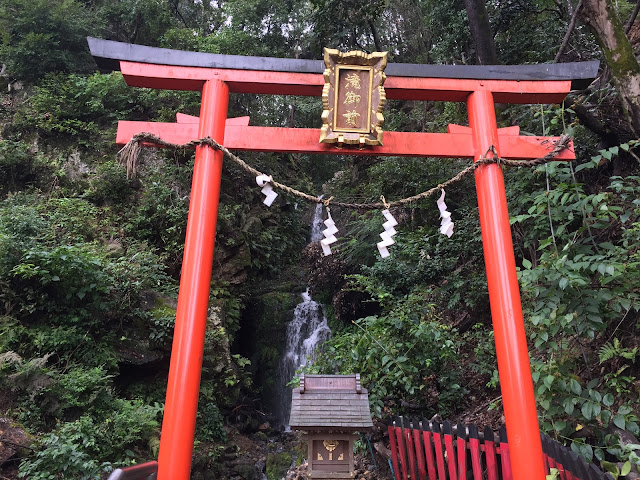 In the third garden of the shrine I had early lunch including a typical Japanese summer sweet, Kuzukiri. 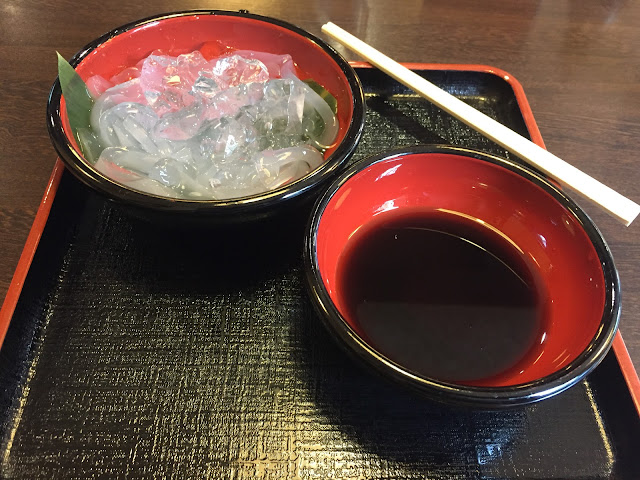 After this stop I continued on towards Suzumushi temple （鈴虫寺）. The guy at the parking lot was not very convinced of me visiting the temple and told me that I could only visit the garden, but not the temple. I told him that I didn't mind and would visit the garden only and thus went towards the temple. At the temple they were again not very convinced and asked me in "Japanese is okay?" and I told them that yes, as long as I don't need to read it. This answer seemed to have convinced the monk at the cashier and I got my ticket and was ushered inside, where an other monk had already started his 30 minutes speech. I joined late, but it was interesting and very vivid. Not monk-like at all. First he explained how to use the Omamori. I am not sure if this is something specific to this temple, but he was very adamant about it that the Omamori consists of 3 pieces, one for one-self, one for friends and one for family. The one for oneself only works if you have it on you at all times. You are not allowed to leave it at home or give it to someone else. Also in order to work you need to give your full address to the god in charge, so that he can come to your home to deliver the wish you made. You are allowed any wish, as long as it is a wish for yourself not for someone else.
In the second part of his speech he introduced the 「素磨歩」(read: "SUMAHO" スマホ) principle. I am not really sure if this is a traditional buddhistic concept, but essentially you need to be pure 素, directed in your own direction 歩 and have a clean 磨 soul. Well he was able to describe it better, very vividly with a lot of laughters form the large audience. (Note that SUMAHO in Japanese means smartphone). He even had prepared a poem that cited the SUMAHO principle and made referecnce to DOCOMO, Softbank and AU (the 3 biggest Japanese phone companies). After the sermon we all were allowed into the garden, but most people just passed through it quickly, not admiring the view over Kyoto... 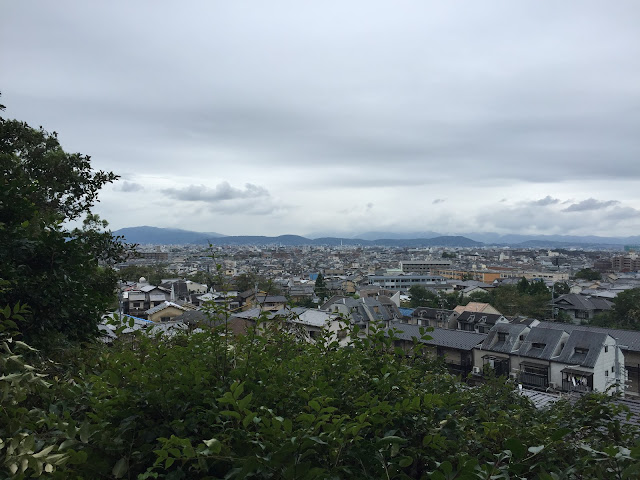 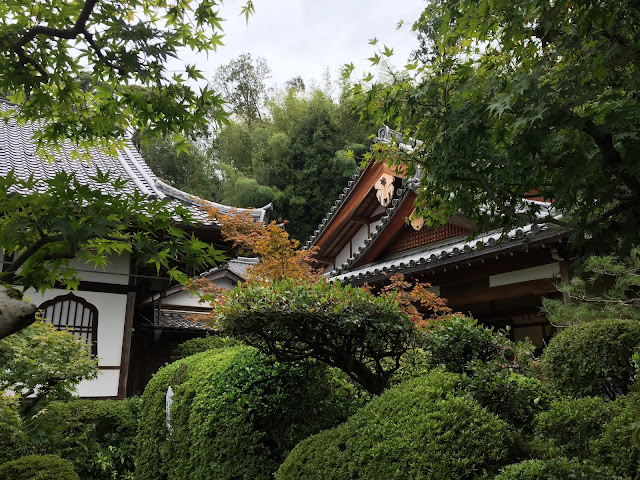 But I didn't buy one of the Omamori's so I guess I am quit with the Japanese on not doing all the things at the temple that one could do. When leaving there had already formed a long queue of new people waiting eagerly to be admitted to the temple and the sermon in order to buy the famous Omamori that will grant you any wish and even home deliver it. Takkyubin for the spiritual.

After this visit I continued a bit in that region, came to Kokedera, which we visited some years ago with an appointment and continued yet a bit further into a bamboo forrest. 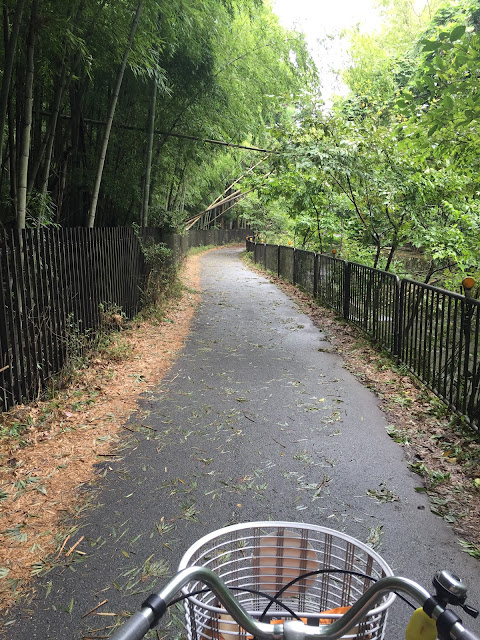 One could still see at many places in Arashiyama the destruction that typhoon 21 had brought with it. 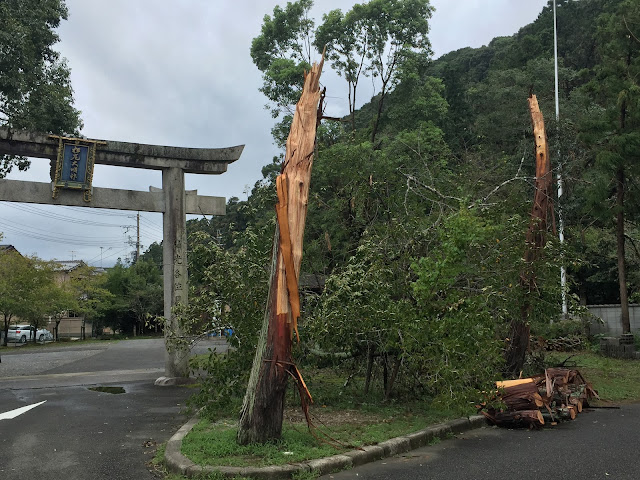 Also the river was incredibly full of water, but it didn't seem that it had overflown. 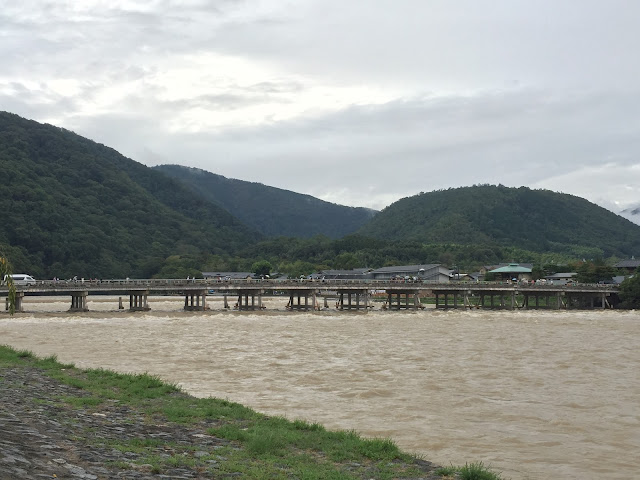 Along this river is the famous Arashiyama cycling road, typical Japanese cycling road alongside a river. I rode it back towards Hankyu Arashiyama station, when it just started to rain a bit, so I took shelter for some time in a rest area close to the river, before finally crossing the bridge, which also was affected by the typhoon, but much less severely than the bridge to the airport. After crossing the bridge I continued into "downtown" Arashiyama which gets quite touristy within a few meters. It is really amazing how much flexibility a bicycle gives even in a place that small as Arashiyama. All the "foot" tourists are close to the attractions close to the station and only a few seem to leave a central area, totally ignoring the nice places just a little bit further afield. Probably also thanks to the fact that the centre of Arashiyama is so packed with tourists, the non-so touristy spots are much more enjoyable. 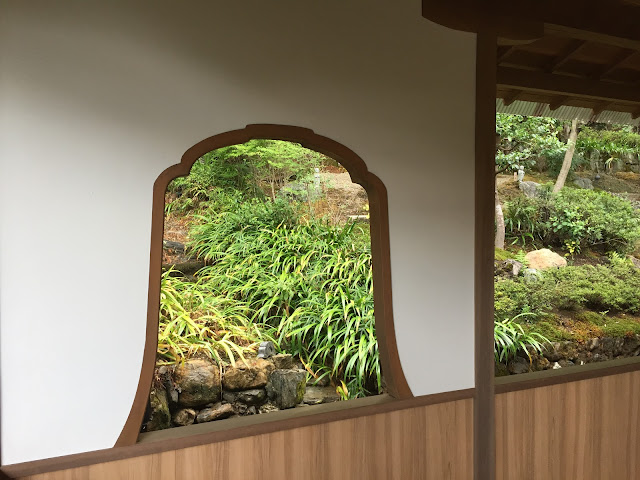 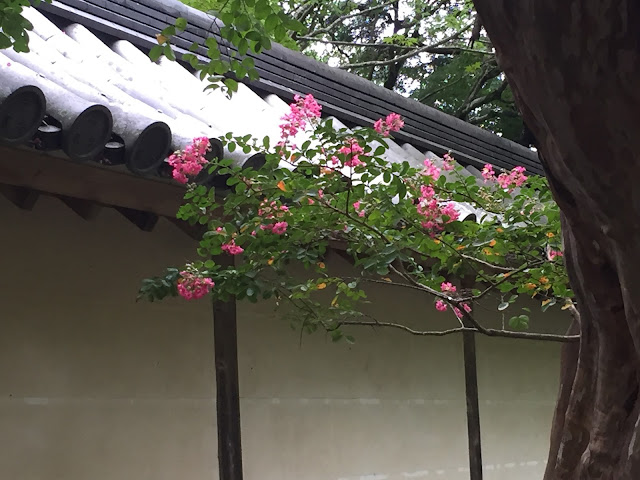 Places like the Nisonin temple. Probably it gets only busy in the momijigari period, when all these green trees become fire red. 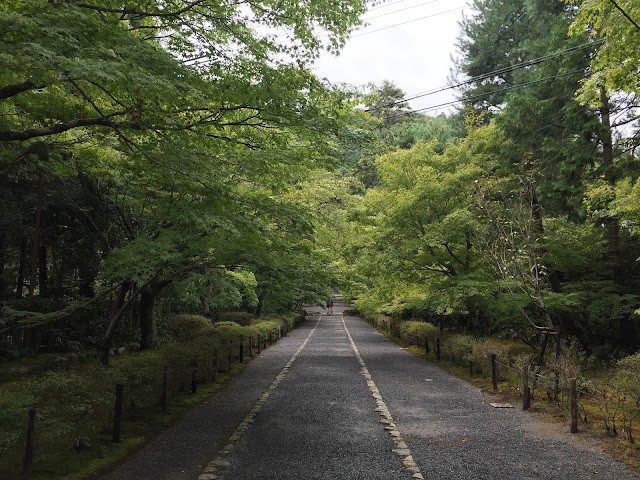 When I was at the temple it started to rain again, but I could wait it out at the temple, then continued a bit more on the street around tranquil (and upper class) neighbourhoods of Arashiyama ... 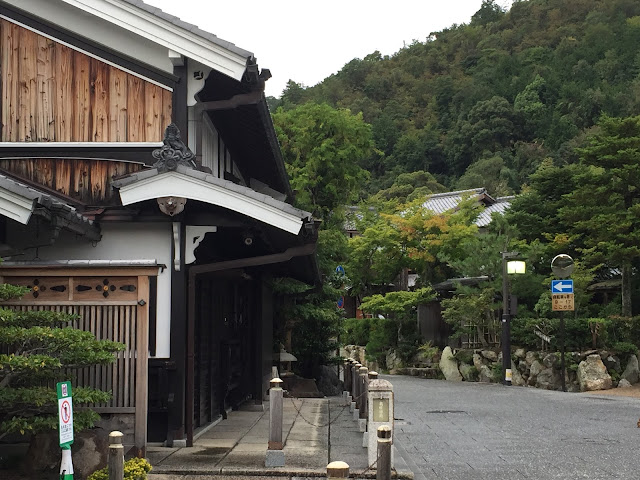 Until a hill came into my way and it was time to return the bicycle.

Right next to the bicycle rental in Hankyu Arashiyama is the Fu-Fu no yu onsen, to which I obviously went. There are at least two onsen in Arashiyama. Probably the other is better known (maybe because it is older) and probably gets quite some tourists and Japanese guests. The Fu-Fu no yu instead was not very busy at all, although it was a Saturday late afternoon. It has 2 tubs inside, one with sparkling water, and one relatively big tub outside, plus a cold water one right besides the sauna. 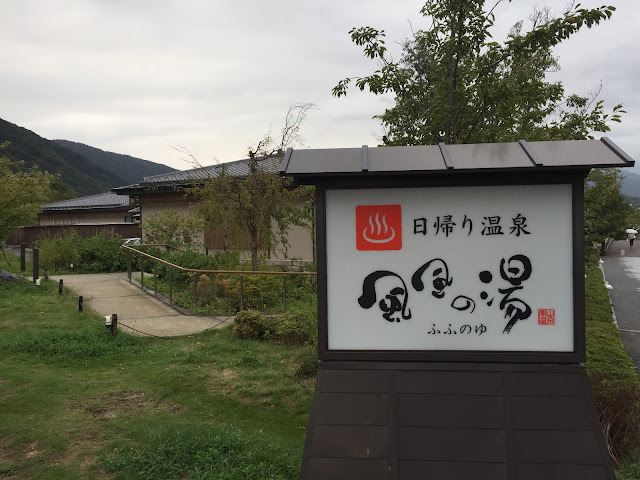 A nice place to wash and relax after a day sightseeing in Arashiyama. Although the onsen is right next to a river, one cannot see it, as there are houses and restaurants just on the other side of the river.  The onsen also does not have a restaurant, but it does have a relaxation room with a vending machine with milk (and other drinks).

After a day exploring slowly on a bicycle the parts of Arashiyama where I have never been, I took the Hankyu train back to Osaka falling gently asleep on the ride back. 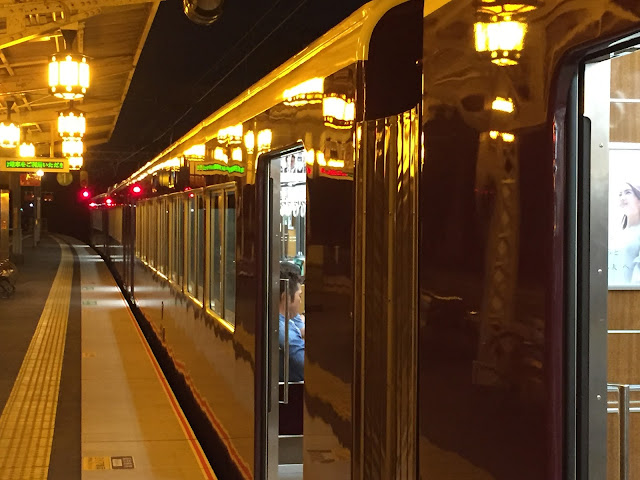