This post describes my bicycle tour of Japan, riding down the West coast of Hokkaido and arriving finally after 5 days in Rumoi, the goal for this leg of the tour.

Today in the morning prior to starting the day, I was not looking too much forward to an other day along the coast. More hills and the same landscape as in the previous 4 days. I was also thinking that I need more things to do apart from cycling. But in this region here there is only landscape to be looked at. Which I do while cycling.

But well, then I got on my bike, got my fluids at a vending machine and set off. The initial kilometres were again full of hills. Not as bad as yesterday but still, up & down. Not something I was looking forward to.

But then after Tomamae the road became flat, so there was "only" the headwind to fight against. Which was quite strong, but doable.

I started the day at around 9:00 and arrived in Rumoi around 15:30, including some breaks along the road.

The accommodation I stayed in tonight, seems to be quite famous in Japan, specially for motorcyclists. The owner also has a booklet with key information of all guests and a photo like this one: 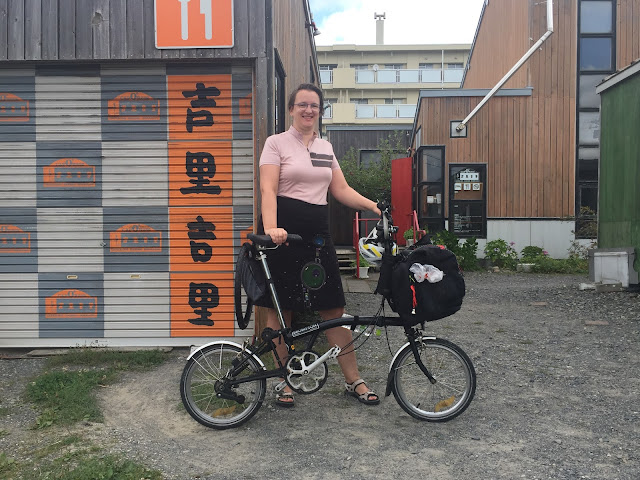 I had a look at the previous bicycle rider guests, and we all stand behind our bikes, as if they were some kind of deer we had just killed by bare hands. Me included. I should have had a look at the motorcyclists, to see what their expression was. The car drivers were more looking like patting a well behaved horse on the back.

Also today the road obviously led along the coast, which is a very windy (and today South - North windy) road. So windy, that many of the villages along the road are protected by high fences against the wind: 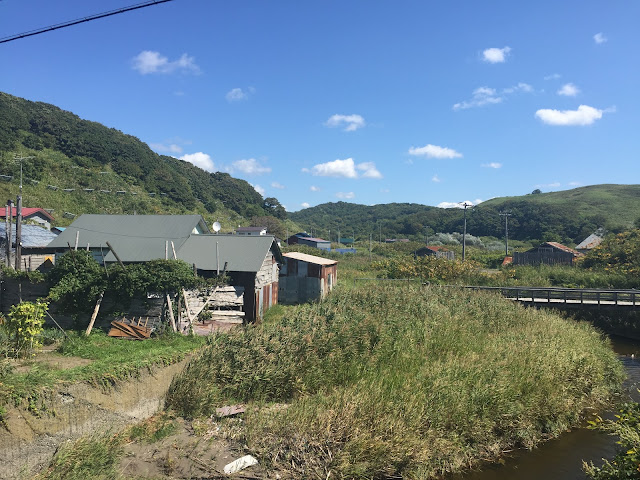 The villages did not get nicer and actually I would say that about 30%, if not more, or all houses I saw today, should be torn down. They are abandoned since many years, falling in bits and pieces, and essentially only a heap of rubbish, but as they can be still considered a "house", I guess that the local administration cannot just declare them illegal rubbish.

In a Northern part of Obira, I had a relatively early lunch, which looked good (also by the fact that people were lining up outside at 11:30, in this relatively remote area! But I have to admit, that at least the dish I took, fresh tuna on rice (とろ丼) was actually not as nice as it looked like: 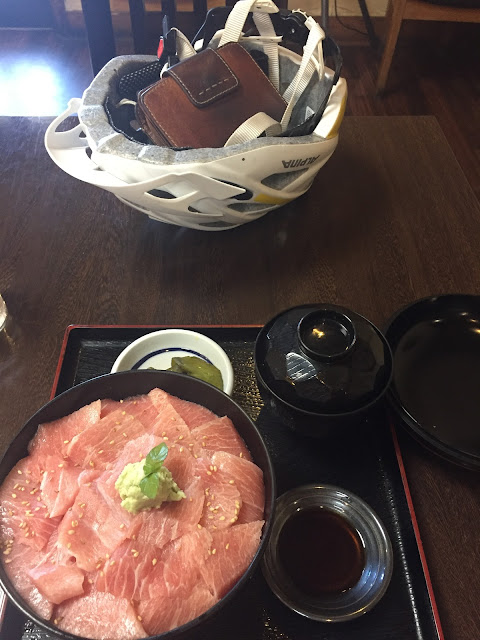 Shortly after the lunch break, I also came by an "Important Cultural Property", the house of a fish merchant family in the trade of herring at the beginning of the century. It seems that herring was mainly fished for use as fertilizers in agriculture, and less for eating the fish as such. These merchants had an enormous building, right on the shore, where they lived, but more importantly where the hired fishermen from all over Japan were staying for the fishing period. 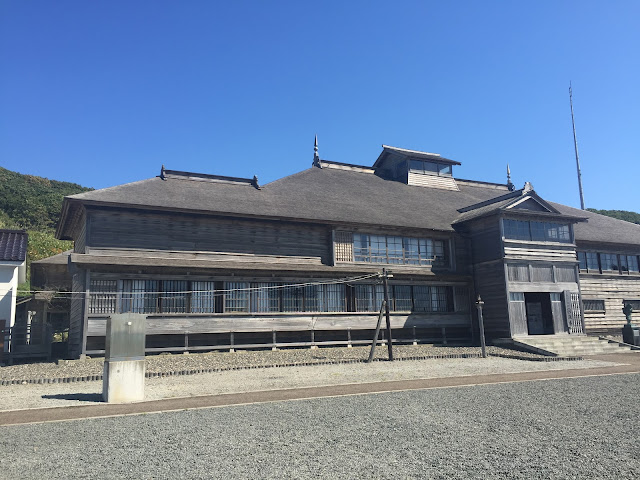 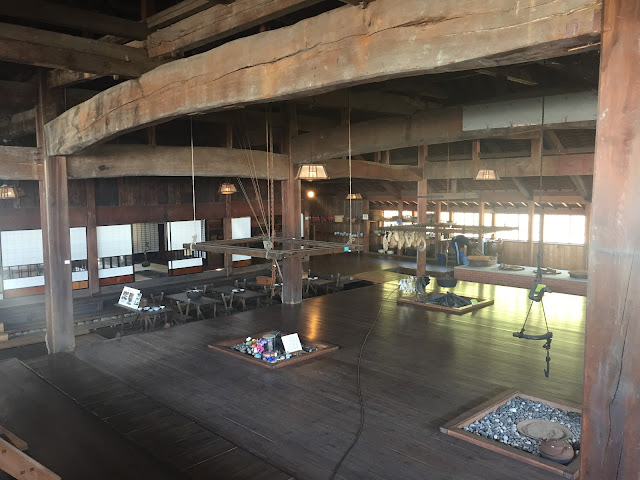 Luckily the street stayed flat even after departing the museum, so that after just an other 2 h probably, I was in Rumoi. I also noticed that Garmin sometimes sees things that don't exist. Per Garmin, at this location a "killer" hill so steep that at least for the descent an elevator would be required, should exist... 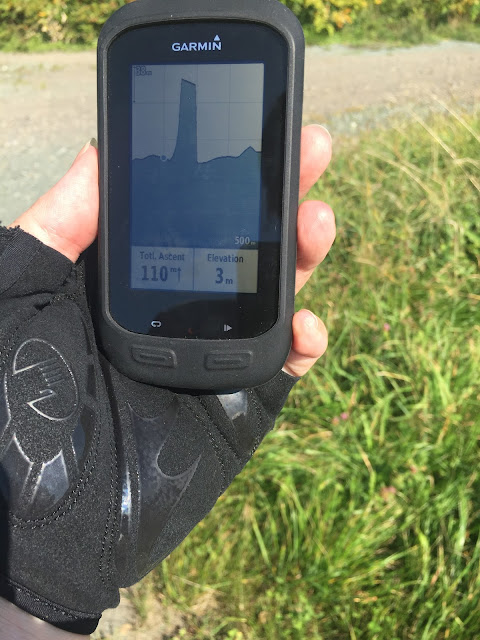 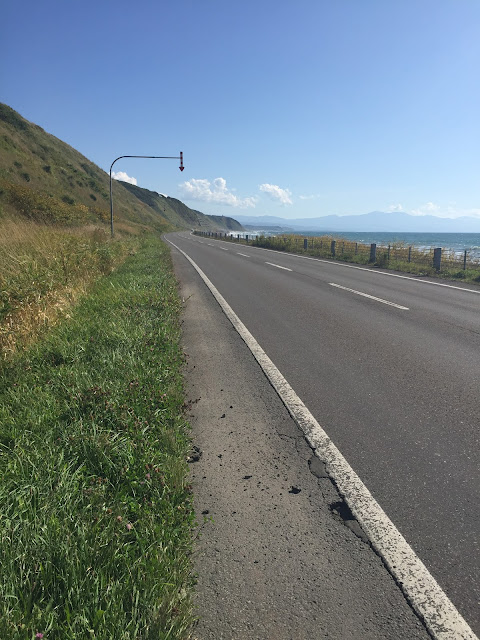 And then arrived to Rumoi, an other not nice town in Japan. Not even a decent onsen in town!
So I went up to the JR station and then looked at Google sensei, who proposed to take a bus instead, which, obliging me, I did. 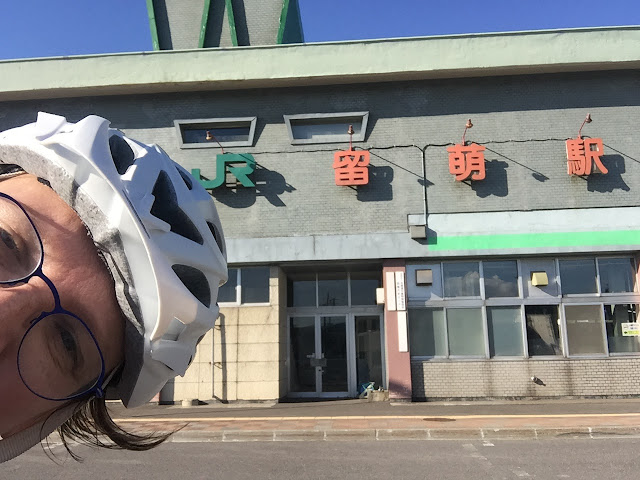 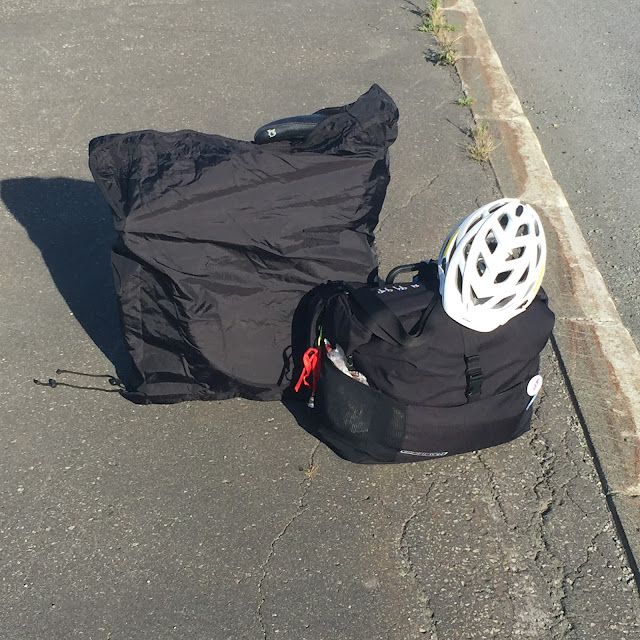 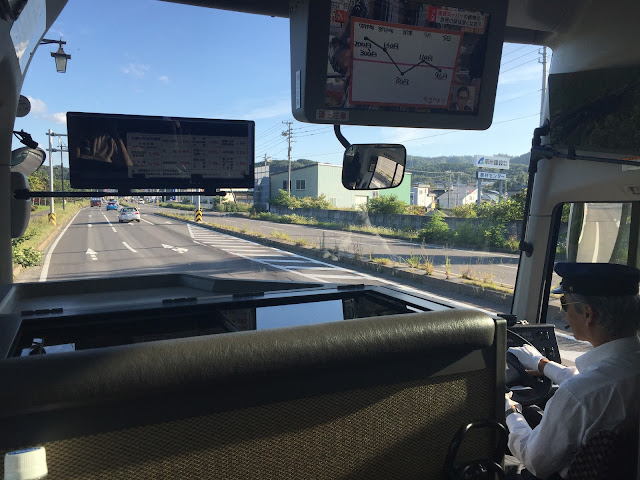 As soon as we were out of Rumoi, and I was looking from the comfortable bus, at the landscape I thought, I should be riding here... 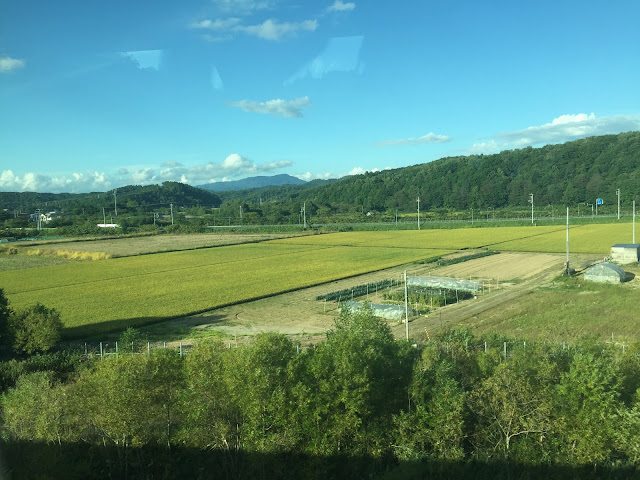 But instead I road by bus to Sapporo to my Toyoko Inn, just outside of the station. No onsen here either, but a bath tub, where I took a bath, short, compared to the previous days of soaking. Then I went off to a shopping mall under Sapporo station in search for something nice to eat (resulted to be sausages, beer and then some pancakes).

Now before dropping to bed, I need to have a quick look at tomorrow. My general plan is to go to the open air museum just outside of Sapporo, visit it and then either ride to New Chitose airport or catch a train somewhere along the road. I also remember that there should be an onsen right inside the airport-shopping-mall-thingy, which constitutes New Chitose Airport. Would be nice to soak off the sweat prior to boarding.

Also today no cyclist in my direction, so either I am the quickest of all (I am 100 % sure, that if anything I am the slowest of all) or probability mandates that I cannot meet any of the cyclists in my direction, if in the opposite direction there are only about 10 cyclists per day (assuming that there would be the same number of cyclists in both direction, at which speed would I need to go in order to meet one???)

I also totally resisted the temptation to jump on a bus along the coast and I even never did push my bicycle up any hill in these first 5 days of solo bike touring :-)