This post describes the first leg of my bicycle tour of Japan, starting at home in Tokyo and flying up to the very North, Wakkanai in Hokkaido.

Finally, today the trip started. I got up relatively early and started my first leg of the trip on a taxi. My flight from Haneda to Wakkanai was at 10:30 in the morning, so I would have needed to leave home at 8:00 to take the train to Haneda... but at 8:00 at least for Odakyu line, but I suspect also Yamanote line it is the peak of the rush hour. I didn't want to start immediately with a hard experience into my trip. So that's how it looked when I boarded the taxi: 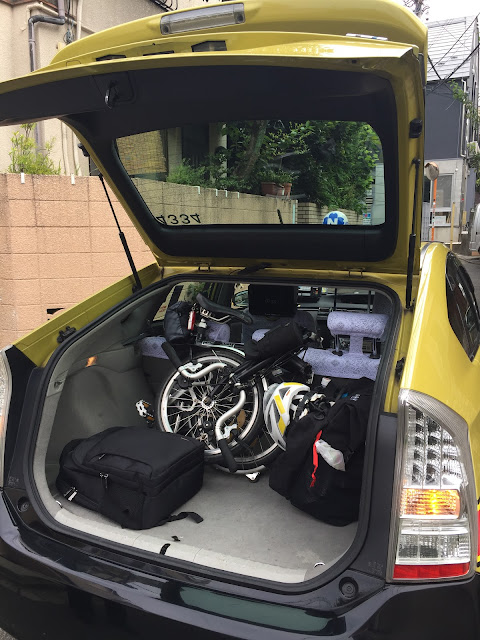 I got early to Haneda and check in of the bike was very relaxed. There was a specific counter for oversized luggage where people were checking in golf carts or ground golf bats. There was actually a big group of elderly Japanese going somewhere to play ground golf. But I left my bicycle there: 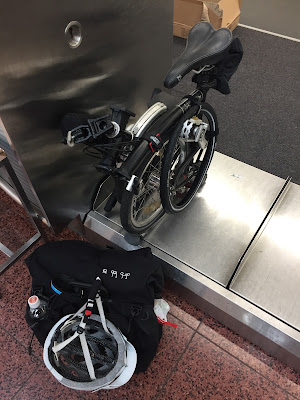 And off we went to Wakkanai: 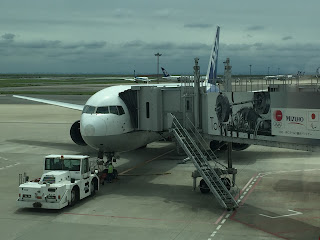 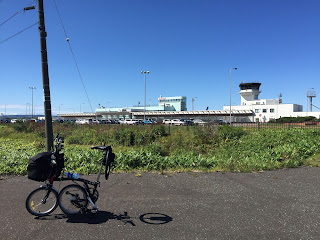 From the airport I cycled into the city of Wakkanai. A small, not particularly nice town, with a big fishing harbour. Apparently something is being fished here, that needs a lot of light to attract them to the nets: 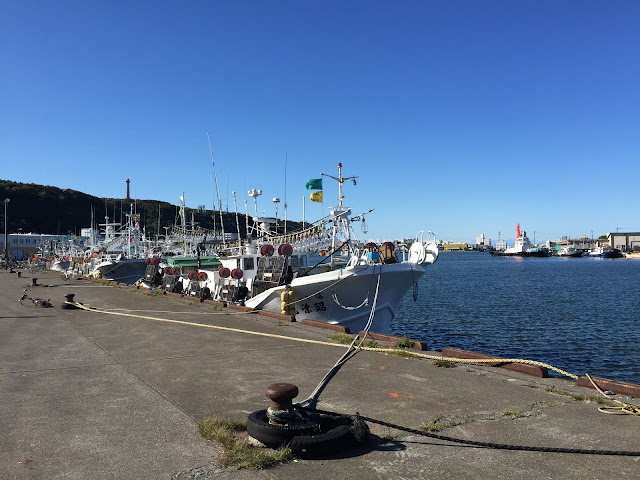 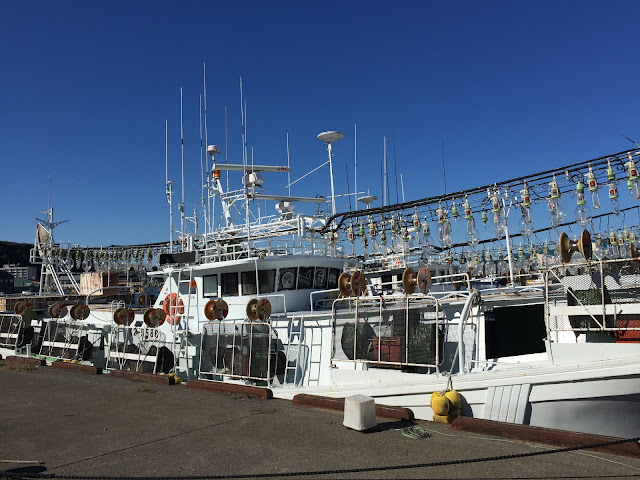 But before coming through the harbour I ate something in Wakkanai. By the time I was in central Wakkanai it was already around 15:00 and I had a hard time finding something open, so in the end I went to a Sukiya. The first time since I am in Japan! It was actually not that bad. Afterwards I also did a bit of shopping for tomorrow, as I am unsure if I can find something for lunch tomorrow along my way. It seems that the coast from here to my next accommodation is not very populated.
Although Wakkanai is such a small and not specially touristically attractive town, there were quite a lot of Russians. Probably not surprising, seeing that Wakkanai is likely the Japanese city that is closest to Russia.

I continued on along the coast, past seaweed farmers, who were drying the seaweed they had collected in the day, on to what will be the most Northern point of Japan I will visit. Actually there is a slightly more Northern peak on the East of Wakkanai, but my road did not bring me there. At this peak there was a very lighthouse'ish lighthouse and an entire herd of deer grassing in the middle of this small village and port: 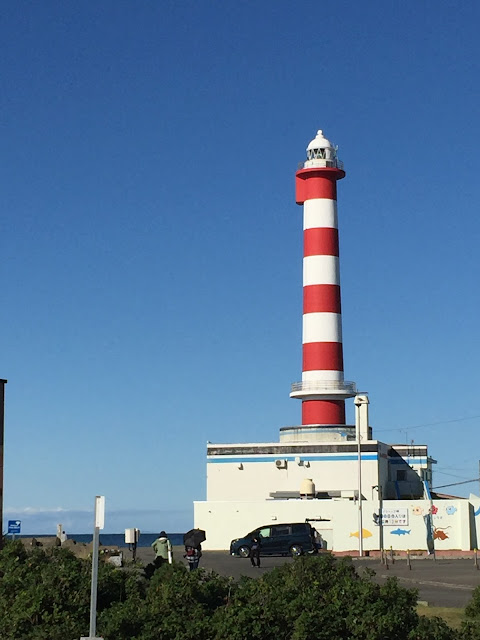 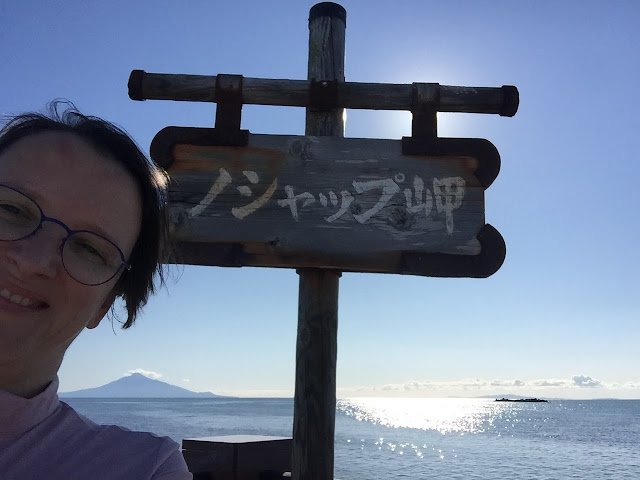 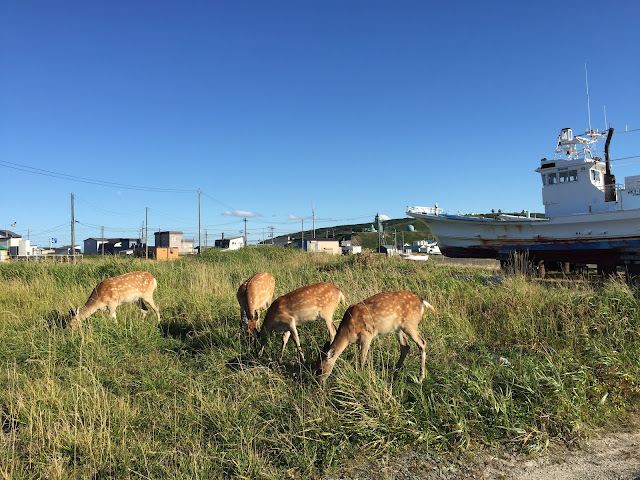 From this Northern point it was only about 4 km to my hotel for tonight. A quite ugly looking, too large building, where we are probably only about 5 guests tonight...In the hotel itself there is only an onsen inside (not outside bath), but the next building is the local onsen, so I went there before dinner for a bath. The inside of that onsen was quite big, outside was only one pool and unfortunately one could not really admire the nice landscape. Although theoretically one could have had a wonderful view over the sea, sunset and the Rishiri island (which essentially is a volcano and thus looks like the Fuji and explains why the village where I am now is called Fujimi), but they had put a quite high wooden wall around it, so only standing close to the wall one could see outside.

For dinner it was mainly fish, shellfish and a crab. Unfortunately I do not like any of this too much. Although probably the one thing that I ate most off was the crab... However it did taste of practically nothing. Dinner was really early, at least for my standards, already at 18:00, but this is Japanese standard and the earlier I have dinner, hopefully the earlier I will go to bed and thus the earlier I can start my next day. Breakfast tomorrow is planned for 8:00. And then onwards down the coast.

Everyone is talking about the typhoon that is supposed to come. But checking my weather app before dinner it seemed that weather will stay extraordinarily nice and that the typhoon will pass to the East of Shiretoko, so quite far from here. Let's hope the best!