What an improvement on the weather from the day before. Today it was nicely warm and sunny. Not hot, but nice enough to ride for a certain time with short sleeves and no getting frozen on the bike as yesterday during the planned picnic ride, which turned out to be a restaurant ride.

I had the entire day for myself for some explorations by bike in Tokyo and then in the evening dinner with German friends. I hadn't planned anything before coming to Tokyo, so just planned the route on the morning. Looking at Japan-Guide I found the suggested neighbourhood of Shibamata and also Rikugien garden. I only made it to Shibamata, also because it was really nice there.

On the way out to Shibamata, I passed by the Hokasai museum... 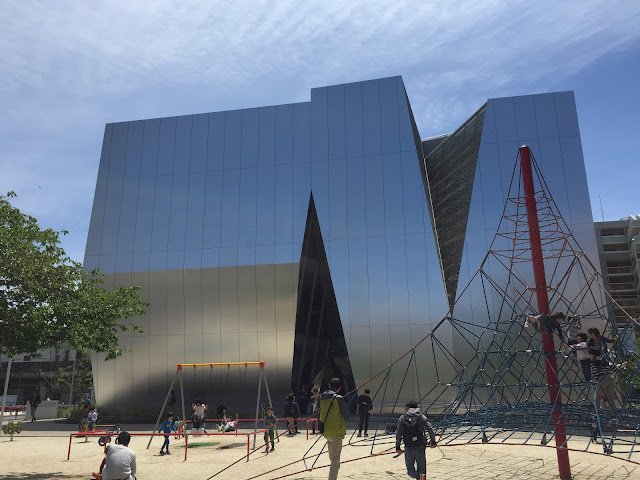 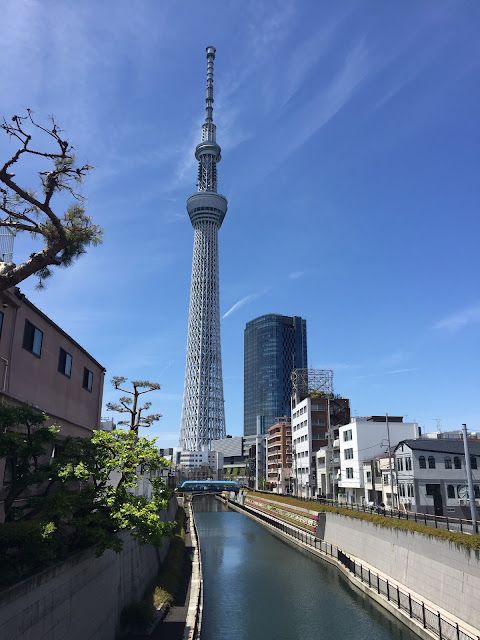 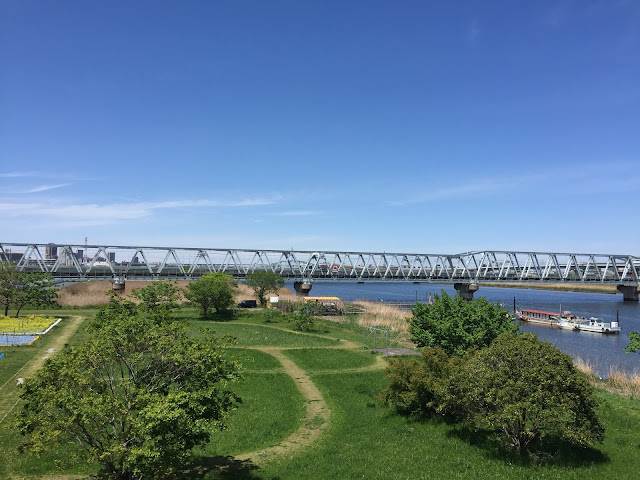 To arrive finally at the highlight of the ride, Shibamata. The main highlight is the temple, which has superbly rich wooden carvings, apparently from the same artists as the famous carvings in Nikko. 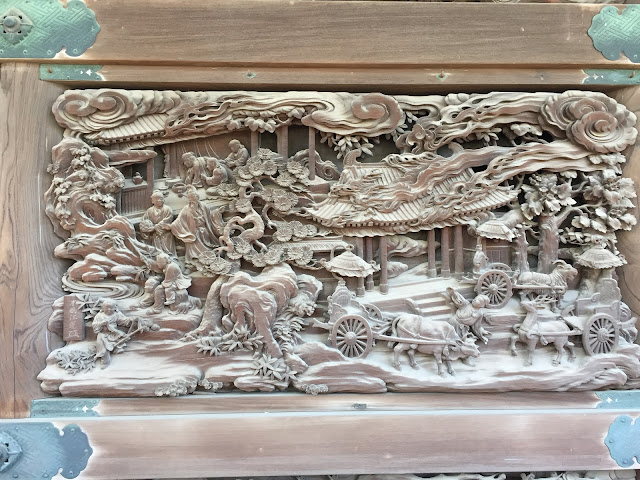 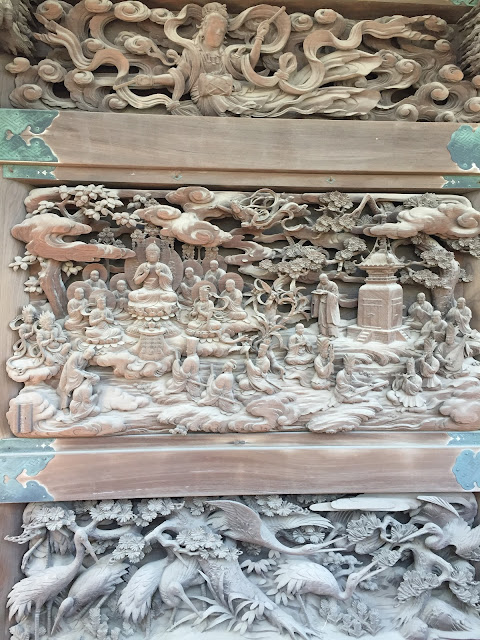 The carvings are now protected from the weather by a outer glass house, but as a visitor one can enter inside that house and get on a kind of podium walking once around the entire temple, admiring at close distance the details of the carvings, which are really outstanding. Very much reminded me of capitals in romanic cloisters.

The temple itself is in a nice temple setting and has the added attraction of a view-garden: 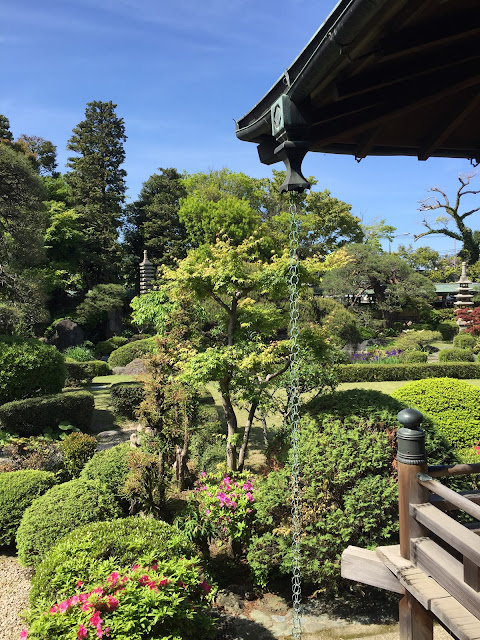 The normal approach to the temple is through an old shopping street full with Japanese sweet and Senbei shops. 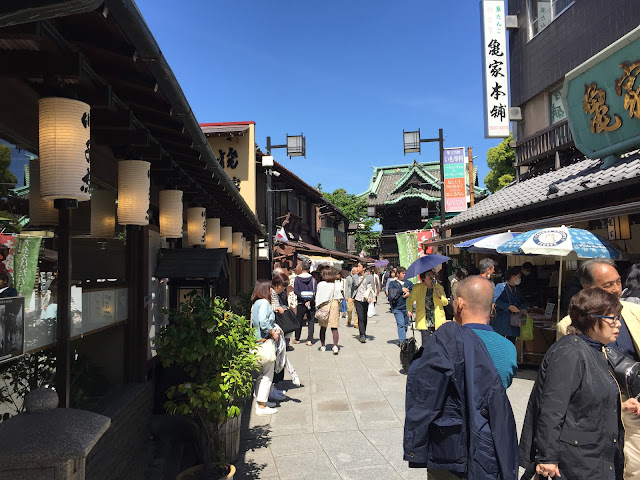 These shops and Shibamata as a whole has also been immortalized in the the films of "Otoko ha tsurai yo" 男はつらいよ. There is even a museum (which I did not visit) dedicated to the films and its director.

While I did not visit the museum, there was yet an other attraction in Shibamata, Yamata Tei, a tea house with garden. I didn't take a tea and sweet (also because I hadn't had yet lunch) but it must be nice sitting there, gazing out into the garden and sipping the bitter green tea. Next time!

After picking up a bento box close to the station, I headed to Edogawa, the river separating Chiba from Tokyo and had my lunch down at the river, not without a view on the last remaining watashi boat: 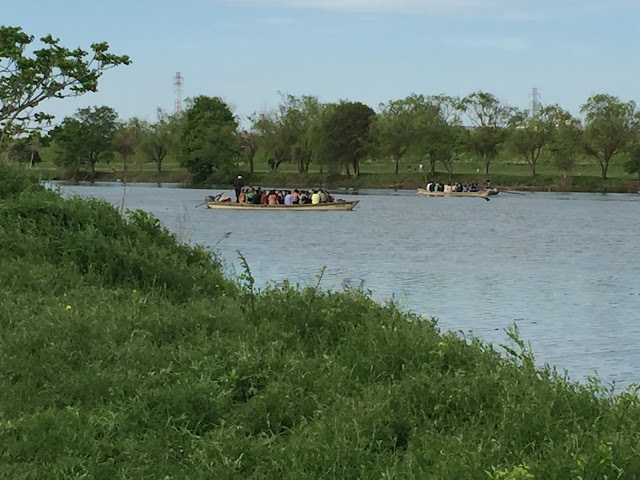 Watashi is one of those words which I knew since a long time means boat, because it is an example of how computer recognition of kanjis work. Watashi means in most circumstances "I", but in some sentences it can mean this very specific type of boat. Now when typing in Japanese, one either types in romaji, i.e. "watashi" or in hiragana, i.e. わたし and then the computer provides a list of possible kanjis from where to choose the right one. Computers mostly guess it correctly, but as a novice writer one has to be able to distinguish the two kanjis 私 (= I) and 渡 (the boat). But as you can see, the kanjis are VERY different, so actually not complicated to tell the two apart, even if you know only one of them and even if you know that one only vaguely.

After lunch I headed back to the centre of Tokyo in direction of my friends. But as I had planned the ride on Garmin to pass by Rikugien, I passed there and stopped briefly. Actually I could have even gone to the garden, as opening hours were prolonged by an hour... but I didn't have time, nor did I want to rush through the garden. So I continued on to Kagurazaka, but stopped at Akagi Shrine, really close to my friends, which I found out only yesterday was build by Kengo Kuma, a famous Japanese architect for which my husbands cousin works.

My friends lent me some towels and I headed off to a quick soak and shower at the local sento, which is a traditional bath house recently renovated, but still very much traditional. In contrary to a normal sento, like the one I was heating up the evening before, this one has several different pools: quite hot with whirlpool effect, carbonated and not so hot water, mist sauna, normal sauna and cold water pool... but no rotenburo. So far the only sento with rotenburo in Tokyo I have visited is the one in Shinagawa.

Freshly bathed we then spend a nice evening on the balcony grilling, later trying the くず餅 (Kuzu mochi), I had brought from Shibamata... all agreeing that we prefer the normal mochi made of rice, rather then the wheat one. And thus a nice evening with friends came to an end.

I hopped back on my bike and made the last few kilometers back to my hotel, where I washed, packed up and got ready for my trip to Nara prefecture.