Along Yodogawa - fastest 40 km ever 淀川沿って走るレコード

I escaped early from work (but had to attend a TC later tonight) and just wanted to get some movement. So I just cycled up on Yodogawa along the route I found 2 weeks ago which starts very close to my hotel along one river and then links up to Yodogawa cycling route. One long cycling road, only interrupted by those barriers against motorcyclists, which however stop everyone from just riding through.

Weather was perfect and I was energetic riding along up the river at quite some speed. So I decided to turn back at exactly 25 km to get a full 50 km. 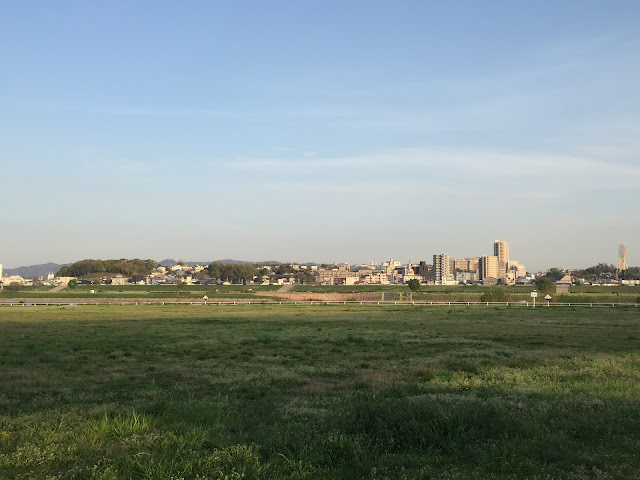 What I hadn't considered, that coming back - downstream - might actually be more exhausting than riding up... because of the wind. It was one of those rides that seemed perfectly windstill... well, only when you have the wind in your back. But still thanks to racing up the river and not slowing down too much on the way back, I made my fastest 40 km ever at only 2:08 h (okay, I know, a lot of other people wont be impressed by that, but hey, it was 17 min faster than the previous record (which was only a few days ago. Which in turn only was very slightly faster than one ride I did about a year ago in the Netherlands.

What was rather surprising is how far I came on the left side of the river towards Kyoto. I had asked the other day some cyclists at the merger of Yodogawa river and Uji river, if there was a cycling lane on both sides of the river, and they told me, no. Only on the right side was there such a cycling lane. But as a matter of fact on the left side there is also one at least until the point where I reached today, which is only about 4 km from the joining of those rivers... And by all that I can see on Strava maps and in 3 D reality this cycling road also should arrive until that confluence. Not sure why they were convinced it wouldn't.

It is true though that the cycling road on the other side of the river especially in the upper part (seen from Kyoto) is easier to ride, as it has way less obstacles.