Tokyo all night with NPC

Tonight, once again 3rd Saturday of the month, Tokyo Night Pedal Cruising night. In August always with the all night ride through Tokyo departing at midnight until sunrise (and beyond).

But the evening started many hours earlier in Enoshima on the beach with a sunset behind Mount Fuji: 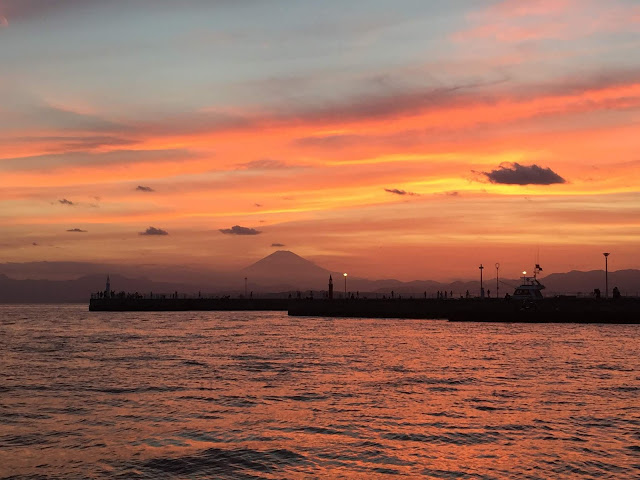 ... after a day we had spent in Kamakura (but without any bicycle), just normal feet. 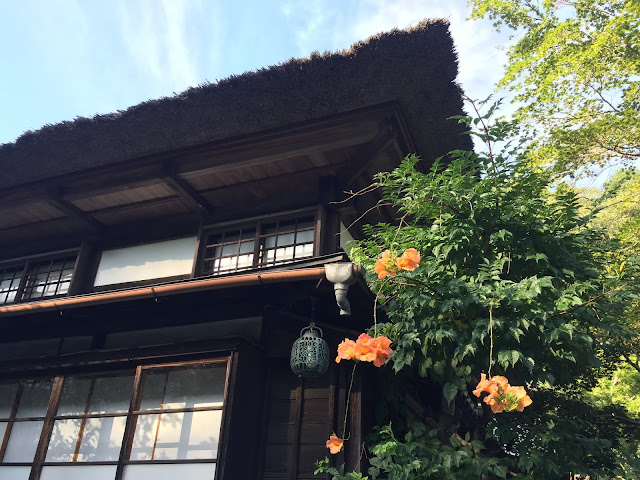 Back in Tokyo I left from our temporary apartment in Daimon to pick up a rental bicycle from Docomo in Shibuya. Luckily in Shibuya there are quite many pick up locations not too far from the station. What I did not know how these bicycles are actually charged. I had assumed that they are being charged somehow automatically through the docking stations where one has to park them. But always wondered how this really works, as the bikes just kind of dock with their front wheel. I had just assumed that Japanese technology is so advanced that they manage to safely charge the battery through the rubber wheel. But during the ride I learnt that no, actually there are people coming through Tokyo every morning manually collecting the batteries and replacing them with full ones. Which also means that the later the day gets the emptier the batteries. But I was lucky, I got a bicycle with a full battery that brought me the full 40 km through the night of Tokyo. It obviously helps to conserve battery by switching on the オートエコ (auto-eco) mode. However at least at night it is not possible to switch of the electrical assistance completely, because otherwise the light doesn't work. And while I don't like the full electrical assistance, the light version of it is very nice up hill (where I easily surpassed many of the other riders) and when starting at a red light, because these docomo cycles, for tiny they are, they are heavy!

First we rode to Shinjuku and then in a big circle to Tokyo station: 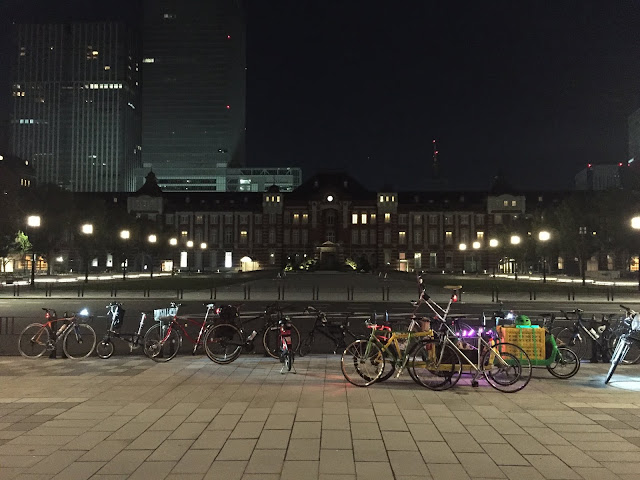 This time, probably thanks to the perfect weather (no unbearable heat, actually it got a bit chilly during the night that I needed to put on a light cardigan that I had brought) and to the fact that it was the 10 year anniversary ride, we were a big group. Initially probably around 30. A few dropped off relatively early (at Tokyo station) but when we arrived at the final destination (Shiba Park) we were still quite a big an very heterogenous group of riders. 3 docomo rental riders, 2 riders on very small foldable bikes, one rider on a mamachari, some more foldable bikes, some racing bikes, 2 carrier bikes, .... really all sorts of bicycles. And all sorts of people who enjoy being out there on the streets of Tokyo with friends riding through the night.

For the 10 year anniversary the organizers even had prepared a specific towel for the occasion: 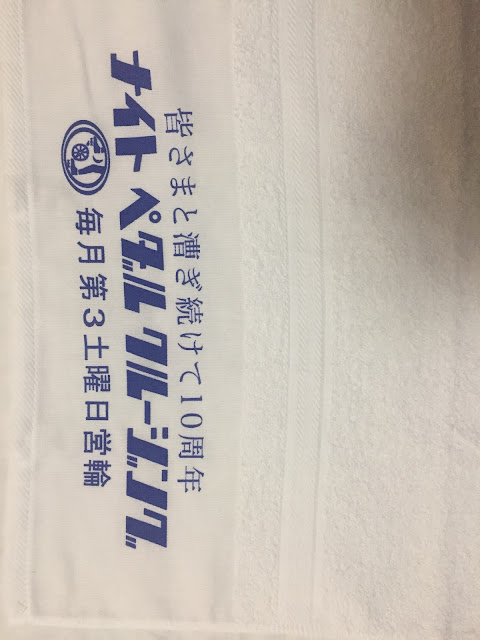 Riding on through the night versus 2 am the city gets very quiet. No trains any more, much less people around. But already around 4 am the sun came up again. Between the time that someone said (in Ryokoku) that the sun seems to come up, to the point where it was already quite bright only a few minutes passed. Maybe less than 10.

Riding on through the now early morning we passed through Asakusa: 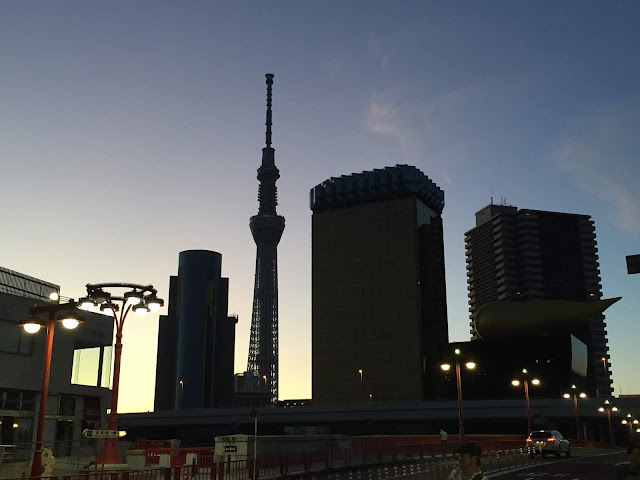 Everyone was getting more and more tired and as now the first trains started some of the "foldable people" started to drop of to get on a train back home. But for me (I could have left my rental bicycle at one of the many stations in central Tokyo), the final destination of the ride was so convenient. Shiba Koen, really just a few hundered meters away from our temporary apartment. So I stayed until the end, to the final bye-bye.

Last time I participated in this ride was back in January. In April unfortunately the ride wasn't on the 3rd Saturday as normally but the 4th, and I was already back in the Netherlands by then.

Tired I arrived at home shortly before 7 am and off to bed. Not before saying good-bye to my husband who went for a day hiking in Mitake. Not my pair of shoes.